Keroche breweries heiress Anerlisa Muigai’s life under the public eye has not been a bed of roses, especially within the past few months.

She shocked many fans after she posted a picture of herself having shed a lot of weight less than a month after being fat-shamed. The before and after pictures were posted two weeks apart from each other.

According to her, she shed all the extra fat thanks to her app which she has been marketing for a year now.

“I don’t know if the changes are visible but I believe It’s the little sacrifice you make that changes everything. I have been on a juicing, smoothie,plant-based salads ( NO COOKED FOOD ) and lots of water diet. Anyone who has done this diet knows it’s not easy at all but the results are good. They say if you complete one thing, you can complete almost anything. *You can get the juice, smoothie and salad recipes from my App which is 3k A YEAR,” read part of her post

This revelation raised a number of eyebrows among her fans with some claiming that she went under the knife and is falsely publicizing her weight loss app.

One fan by the name Twinkle Kelly on Facebook urged the billionaire-baby to stop misguiding the public. 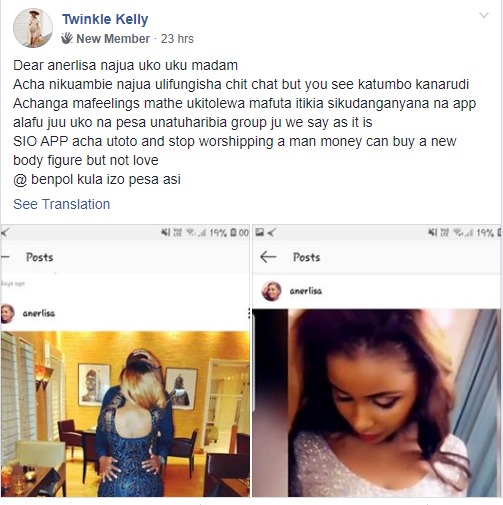 The accusations must have rubbed Anerlisa the wrong way and she took to her Instagram to address all women who spread rumours about her and other women.

“Women please stop entertaining gossip and nonsense talks. I really want 2020 to be the year where women have the most achievements, the most awards, more recognised etc,” she wrote.

She reminded them that a praying woman is a winning woman. Check out her full post below: