Arnelisa Comes Clean on Why She Quit Social Media

Heiress of Keroche Breweries and Queen of Nero Water, Arnelisa Mungai has come clean on why she has not been posting in a while.

Early in October, she hinted that she was leaving and had never posted ever since.

Posting on her instastories, Arnelisa stated she needed a break and was seeking to have some peace of mind.

“A month ago I decided to take a break from social media to see if I really need it in my life, and also to see how my peace without it would be,” she wrote. 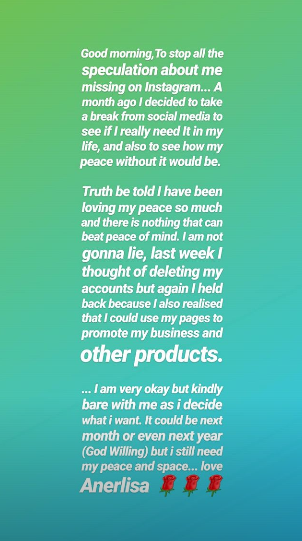 With a whooping seven-hundred thousand followers on Instagram, Arnelisa told her fans that she has loved the peace that came with her quitting social media.

According to her post, Arnelisa claimed that she felt like deleting her accounts but had a second thought.

Nero Water CEO said her account were still active because she thought she could use her pages to promote her business and other products.

“I am very okay but kindly bare with me as I decide what I want. It could be next month or even next year but still need my peace and space,” she added.

Arnelisa joins a list of celebrities who most of the time are forced to deal with hatred and deal with different types of social media characters for their image.

Even though she has not been involved in any scandal, it would be best if people respected her wish.

On and off some celebrities have everyone throwing in their opinion on how they should live.

Tanasha Donna Gives Us A Sneak Peak Of Her New Music