Over the past decade, Kenya’s public figures especially politicians have been caught pants down with fake University degrees.

Today, Comedian, who adds up as  NACADA director, Vincent Mwasia Mutua popularly known as Chipukeezy has joined the long list of celebrities with blasted fake degrees after being exposed for lying about his graduation.

According to Vlogger Edga Obare, Chipukeezy never graduated from Mount Kenya University (MKU) in 2019 as he made his fans to believe.

In his exposé,Edga shared the list of MKU graduation list of the year Chipukeezy claimed to have graduated in his instastories and the funny man’s name was nowhere to be seen.

After all the congratulations, it turned out to be a scam. 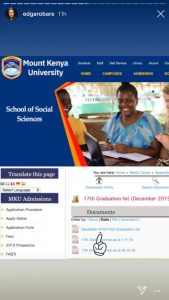 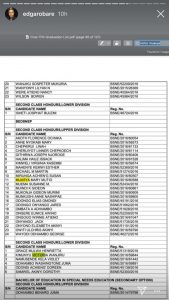 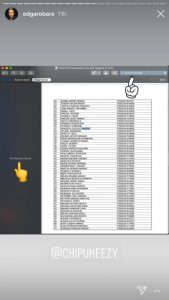 Celebrating his graduation, last month, Chipukeezy took to his Instagram account and shared his photo in graduation grown.

Accounting to him, he graduated from Mount Kenya University, however, he did not disclose the course he was taking.

“No human is limited @kipchogeeliud congratulations,” He wrote.

After posting his photo, fans were quick to congratulate him on his new achievement.

Did Chipukeezy felt the pressure of adding another feather on his hut?

Every year, during any graduation ceremony, we have all witnessed a celebrity being among the graduates, perhaps this explains why he faked his graduation.

As the saying goes, fake it until you make it, let’s hope one Chipukeezy will have real graduation.