Edgar Obare Responds To Claims That He Is Gay

Popular Kenyan Vlogger Edgar Obare has finally addressed claims that he is gay. This comes days after a Kenyan gay man; Mpenzi Choku blasted him claiming that he is gay and still hiding in the closet.

Choku threw insults at the vlogger insinuating that he hates other gays instead of coming out. He also seemed bothered by Obare’s content and advised him to focus on his own life instead of poking holes in that of others.

In a recent post, Obare responded saying that the outburst by Choku was triggered by hurt feelings and implied that it was uncalled for.

His response was triggered by a fan who asked him to publicize information about Chimano’s (Sauti Sol) sexuality. 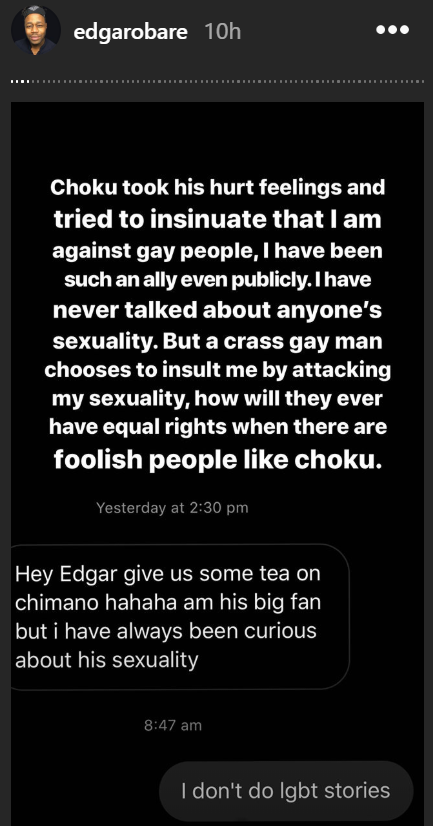 The blogger also came clean on the allegations that he hates gays stating that he has always been a friend publicly and has always refrained from talking about other people’s sexuality.

“Choku too his hurt feelings and tried to insinuate that I am against gay people, I have been such an ally even publicly. I have never talked about anyone’s sexuality. But crass gay man chooses to insult me by attacking my sexuality. How will they ever have equal rights when they are foolish people like Chokuu.” He wrote

The exchange between the two was sparked after a post by Edgar Obare which exposed Choku for copy-pasting a message from Facebook and posting it on his Instastory.