Diamond Platnumz and Tanasha Donna have been the talk in East Africa.

To those that have been thinking Tanasha Donna is raising baby Naseeb alone or their relationship is on a downfall. You have it all wrong!

Diamond Platnumz shared an adorable photo of his son Naseeb playing with a piano that had control sound buttons.

In the photo, Naseeb looks like he is trying to figure out a beat. The ‘Baba Lao’ hitmaker was hinting he may be dropping another banger.

He is clearly enjoying father duties and making sure he is there for his son despite busy schedules. 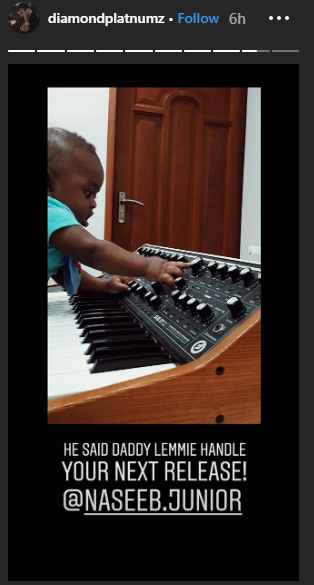 Recently on the social media platforms, Mama Dangote urged her son, Diamond to settle down with Tanasha because she is the perfect woman for him. She added that he needs to stop hitting on other women and avoid that habit.

The former NRG radio presenter surprised fans when she responded to her future mother-in-law.

Diamond promised his mother to adhere to what she said.

We are now waiting for the moment he will propose and finally marry our very own Tanasha Donna.