Laikipia Woman Representative Catherine Waruguru shows off her baby bump days after attacking Kirinyaga governor Ann Waiguru for not getting pregnant after the wedding.

Speaking during the Inua Mama rally in Uasin Gishu county, the Laikipia lawmaker said the governor was still green in politics as she was a first-time governor.

“Let me remind Waiguru that just because she was fronted by the Jubilee party, it doesn’t mean she is the Wangu Makeri of the Mt.Kenya region,” an angry Cate said. 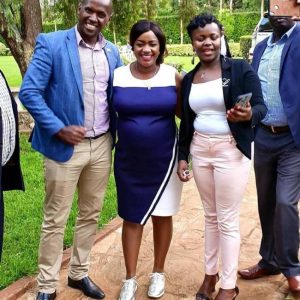 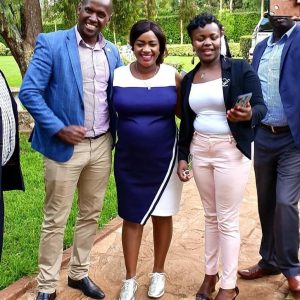 Cate is proud of being a second wife to Nanyuki lawyer William Kigen once told  Kenyan women to consider getting married as second wives to avoid being single mothers.

A few months ago, when she was barred access to a Kericho hotel for failing to produce a marriage certificate reiterated, she categorically set the record straight on her marriage.

In an interview, Waruguru said she had no apology to offer to anyone for being a second wife. Adding that she was proud and better off that her husband was the man she wants to be with.

“I am married to Kigen and my union is recognized by the Constitution. As a proud second wife and my husband is the man I want to be with always. Nobody can judge me because only God has that ability. I know many people out of those criticizing my union who are married but have side lovers,” she said.

“You will realize that I am better off if I know this is the man that I want to be with. I would like anybody to challenge me and tell me whether if I am cast to go to hell because I am married the second wife,

Waruguru said those who were speaking ill about her choice of marriage needed to be bold enough to give evidence showing she would go to hell just because she was married as a second wife.

Gengetone is a Wave We Cannot Ban It – Veteran Producer Musyoka