The radio host has organized a symbolic party that will see only 40 friends pay KSh 40,000 to enter the venue.

An excited Jalang’o his co-host took to his Instagram account to show off Alex’s expensive birthday cake of his symbolic party.

“That’s what we are talking about, kama haukulipa hauko  hautakuja guys Alex birthday cake has arrived kama ulikuwa unafikiria ni jokes now you know straight out from 1980,” he said.

A few days ago, the King of Radio announced that he will be throwing the most expensive birthday party in Kenya.

A party flyer popped up on social media that shows those willing to party with Alex will have to cough up a whopping KSh 40,000 as an entrance fee. 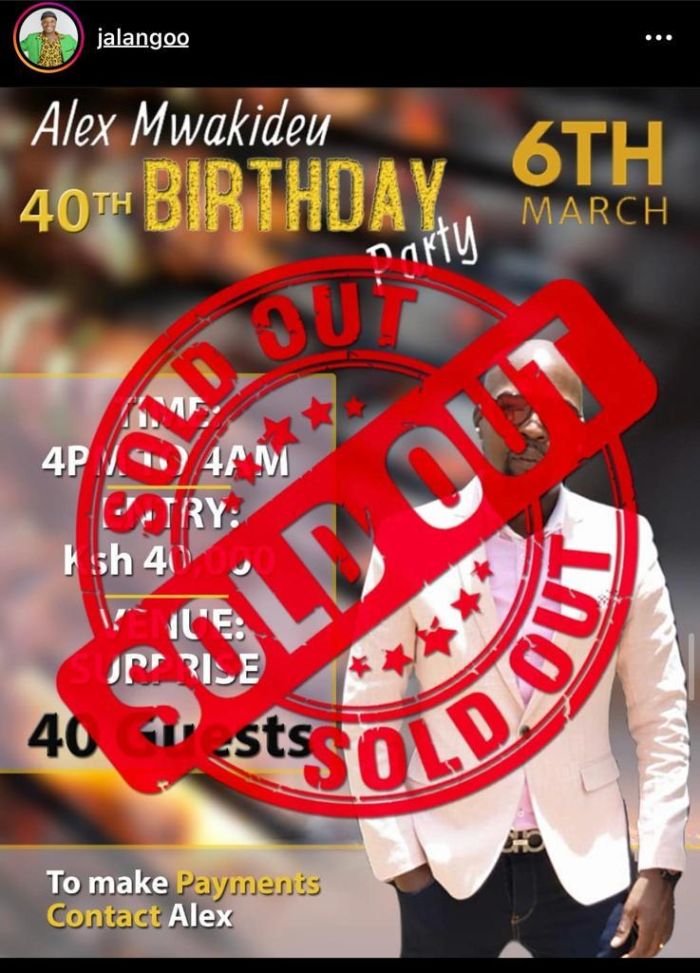 In what sounded like a joke from Jalangoo his co-host on Milele Fm now turning out to be true.

However, before the D day, Alex Mwakideu had managed to garner Ksh 1.6 million in a few hours after his radio co-host, Jalas announced that 40 tickets for Mwakideu’s birthday were up for grabs.

Well this dude must be sure enough that his boy club isn’t of ordinary Kenyans!

Last year, the Milele FM team treated him to a surprise Birthday Party with colleagues at the Mediamax owned station.

Videos shared on Social media indicate the lavish party was held at a joint in Kileleshwa, bringing together all Milele FM presenters to celebrate their boss upon turning a year older.

Here is the video of Mwakideu’s 40th birthday cake.

Wajesus Family Message to Edgar Obare After He Exposed Jalang’o

Wajesus Family Message to Edgar Obare After He Exposed Jalang'o