Lsk President Rejects Claims That He Has Just One Tie

The newly elected Law Society of Kenya president, Nelson Havi, has dismissed the claims that he only has one red tie.

He claimed that the opposition party has been shaming him of appearing in the red tie all the time.

“May I take this early opportunity to dispel oppressive, unfounded, unsubstantiated malicious claims propagated by the opposition party that I only have one red tie. The true and correct position is that I also have one blue tie and another black and white tie. That’s all I have,” he said. 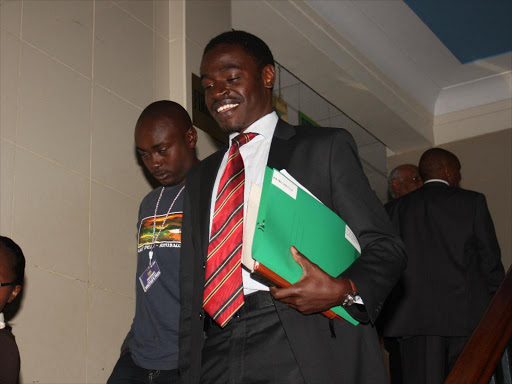 His response comes after one Mike Bklexy, blasted him through twitter saying that he should stop being a boring president for always being in one color tie.

“The red tie that you wear everyday DOS is becoming a bore. As a status symbol it has achieved its intention. Every Kenyan now knows you are the most powerful lawyer no counsel in the land vaanga SAA zingine blue ,purple as even now uko na marurupu mengine as prezzy,” he said.

His response invited mixed reactions from Kenyans on twitter;

Si wewe pekee…. They made us believe Njonjo had one suit, moi one pair of shoes..🤣🤣🤣🤣

Kenya hakuna opposition party unless the one led by Arap.

Mr President I can add you more. pic.twitter.com/TdmAlRUmI6

😅😅Get a yellow one

They must be the same lot that used to say Obama has only one white shirt.

Dear Hon. President Havi, the ties you have are more than enough 😂😂
Have a blessed day Sir.

‘I chose to forgive myself,’ Babu Owino on DJ Evolve’s shooting incident