When most of you are stressing to book flights/buses and fuel your cars for the festive season, a brave man, Mark Maraga decided to use his motorbike to travel to his shaggz.

Mr Maraga is a Boda Boda driver who operates from the junction of Kenyatta Avenue and Uhuru Highway. He revealed that he fills up the tank with Ksh.1,400 which serves his journey to and fro.

There are no stopovers in between his journey. The 26-year-old man started his Boda Boda business in 2012 after clearing high school. He began operating in Kitengela, Kajiado county before he moved to Nairobi where he earns more.

“I started my boda boda business in 2012 after I finished secondary education. I started in Kitengela, Kajiado County, before moving to Nairobi where the earnings are better,” Maraga, who makes at least Sh2,000 daily, says.

Maraga who has been travelling to his countryside, Kisii via Boda Boda now carries passengers. He revealed how his first passenger paid him Ksh.3,000 and has never used a matatu after meeting Maraga. 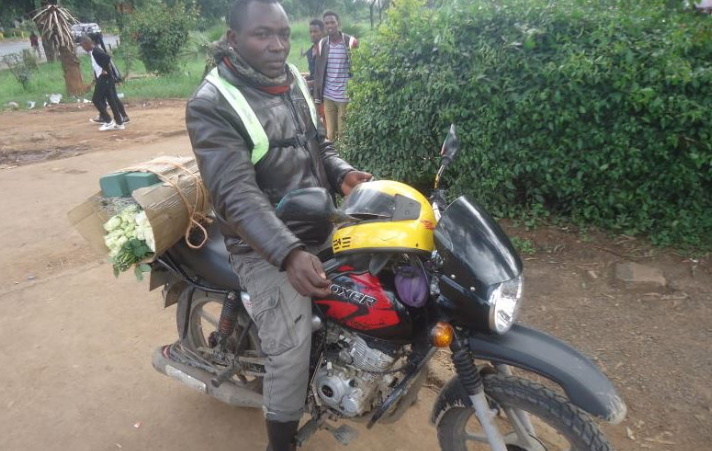 Using a motorbike to Kisii takes an average of four to five hours while a bus uses seven to eight hours.

“The journey takes between four and five hours but a matatu or bus will be on the road for up to eight hours,” Maraga said.

Maraga is not the only one who rides his boda boda motorbike to the village during the festive season. He has other mutuals who do the same.

Solomon Owise,28-year-old Boda Boda driver said he leaves Nairobi for Kakamega County at around 6 am and he picks up clients at Kangemi Bus Stop where he charges them between Ksh.1,500 to Ksh. 2,000. The father of three added to get to Kakamega County, Lurambi is just five hours away.

“I spend five hours on the road provided my motorbike is okay and I am dressed well and armed with all the necessary documents,” he says.

Maraga and Owise said that preparation is key to a good journey when travelling long distances because a motorbike is not like a car.

“A motorbike is not like a car. You have to dress well and a motorcycle jacket is mandatory,” Maraga says.

Juliana Mwangi, a salesperson at Car and General, Nairobi, says any motorcycle with a small engine, below 160cc, is not good for long-distance trips.

“It is prudent for Boda Boda owners to know which kind of motorbikes they are using to avoid the unexpected. They should dress well with proper safety gears, be armed with a licence and have valid insurance cover,” she says.

Kenyans Don’t Be Conned! Why You Should Be Very Careful When Writing Dates in 2020

Kenyans Don't Be Conned! Why You Should Be Very Careful When Writing Dates in 2020