“Sorry, this page is not available, The Link you followed may have been broken or the page may have been removed, “reads Instagram message. 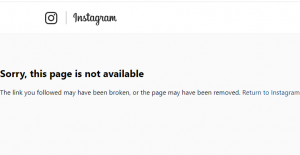 On the other hand, his video vixen/lover was summoned by Tanzania film board and forced to issue an apology.

Vitamin U was pulled down from Youtube after Kenya Film Classification Board CEO Ezekiel Mutua reached out to google over nudity.

“Google has confirmed to us that the two videos Tarimbo by Ethic and Vitamin U by Timmy Tdat are not available on YouTube to users with restricted mode turned on. Google has facilitated restriction for kids as long as the restriction mechanism is activated. The Board shall be vigilant to ensure this kind of unpalatable content is not accessed by children,” Mutua said.

Mutua was not the only one but many people expressed their concerns on social media over the level of nudity portrayed in the video.

In the video, a naked Timmy is seen caressing a nude Ree in a bathtub with the singer’s hands cupping Ree’s breasts.