Victoria Kimani Excites Netizens After Sharing Pictures Of Her in ‘Shaggz’

We have all grown up knowing that every Christmas is shaggz time and that is where the beautiful Victoria Kimani spent her festive season.

The ‘Mtoto‘ hitmaker excited netizens after posting photos of herself in the countryside. In the video, there are children blowing balloons and playing around and her relatives playing a game called ‘water balloon fight‘.

What made these pictures more interesting and hilarious is when she was seen cutting chapatis, greeting hens and goats.

“Hey friend, Wossap, look at your beard though. Beard gang!” she stated. 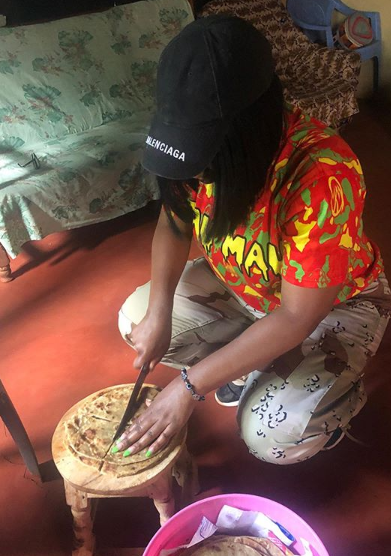 In an Interview with Up Close with Betty, the songbird revealed that she would love to get married someday and have children. Ms Kimani added that she will wait until the right man comes along since ‘bad boys’ have been a portion.

“My love life is dead, I’m not dating anyone. There is someone I want to date, but you know I don’t really think he wants to date me. I think I go for the wrong kind of guys, I think I go for like bad boys and that’s not good,” the confessed.

The award-winning artist values family and said that she would want her children to grow up with a mother and father. opened up about fear of being a single mother

“Now I do want to settle down and have babies but I really need to be with the right person, because my worst fear is to be a single mom. I would like my child to grow up with mom and dad at home. So I’m willing to take my time, rather than rush and have someone’s baby and then he doesn’t want to be with me because then I will go crazy,” she added.

Obaidul Quader: Politician goes viral after posting 10k photos on Facebook at once